A Trading House – Leighgården – house No. 16

Morten Leigh (1778 – 1816), a tradesman, arrived in Røros during the early part of the 1800s. In 1806 he purchased his own building, house no. 16 in Bergmannsgata. At that time Røros Copper Works had a monopoly on the purchase and sale of all goods and provisions to the employees of the Company.

The sale and purchase of goods was conducted by means of a Company Store or ‘Provisions House,’ which had its own Manager. However, it was difficult to retain a monopoly. There were others in Røros who were tradesmen, and attempted to obtain a permanent income, among them Morten Leigh.

Vigorous trading must have been carried on right from the beginning of the Company’s activities in Røros. People from all over the country transported their wares to Røros to exchange, purchase and sell. After some time extensive trading channels developed between the mining town and the surrounding countryside. Much of the trade was conducted through the Company Store, but considerable trading also went on outside the Store’s control, from man to man.

When Morten Leigh died in 1816 his widow, Berthe Martha Beenberg (1776 – 1859) took over the whole business. Madam Leigh, as she was known, has been recorded as a clever business-woman. She was among the first three people to be granted trading privileges in Røros. The shop in house no. 16 in Bergmannsgata still operates under the name of “Lekbua”.

Madam Leigh ran her business with the help and support of a Swedish assistant, Magnus Engzelius (1791–1868) from Vika in the Swedish district of Kopparberg. In 1820 the Swedish assistant invested 5,000 silver spesier into the business and he became a full partner. Since that time the name of Engzelius has been connected with the town’s oldest trading establishment. The seventh generation are still running the business. In 1992 the shop became a part of the Rimi conglomerate. Today it is part of the Bunnpris chain.

The second in line of succession in the Enzelius family, Johan Magnus Engzelius (1821–1893) opened up offices in Finnegaarden, house no. 13 in Bergmannsgata as the business in Leighgaarden took up more and more space.

Both the Leigh Building (Leighgaarden) and the Finne Building (Finnegaarden) are among the largest buildings in Røros and, later, Engzelius also purchased Bredalsgaarden. The trading company’s solid economy set its mark on the buildings both inside and out. The headquarters, Leighgaarden, when renovation was completed around 1900 had one of the most eye-catching street fronts in the town. 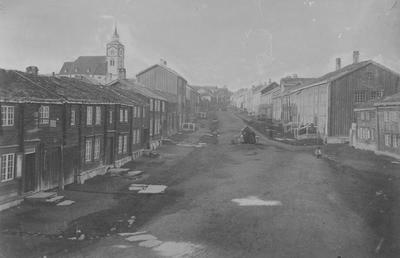